I’m a bit late here … the girls turned 6 and 2 in the middle of October.

Zoe’s now 6, and full in to being a Kindergartner.  It’s astounding how much she’s learning now, though she’s exhausted by the end of most days.  She brings home books from school and slowly works through them, working out the words on her own.  I think I was more excited about her starting to read than she is, though she does enjoy it.  She also loves playing with her sister and helping her sister with things.

that includes helping her sister to pose.

Hazel is 2, and rapidly leaving all the baby things behind.  She’s talking a lot, and will entertain herself for a long time playing with her bears or her doll, and she’s always asking to, “read more book, Mama!” 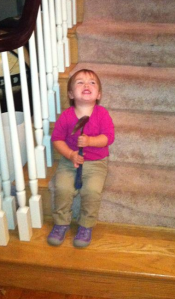 I..ah, took lots of rock hammer for scale pictures this time around… 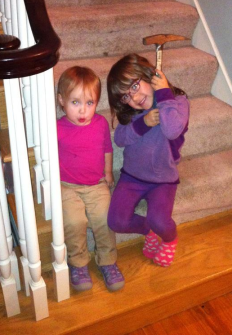 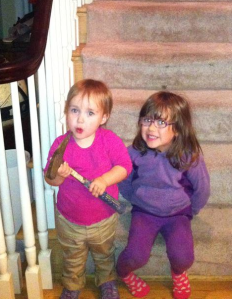