this may be the most shocking thing I’ve posted

I became a vegetarian 18 years ago at the young, idealistic age of 15. At the time, it was all about how I could save the world. In my simplified world view, if we stopped eating livestock that consumed far more resources than we got back in the form of protein, well, then we could feed the world. So yeah, simplistic, but hey, I plead being 15 years old. Since then, the reasons for being vegetarian have morphed – now it’s for environmental, sustainability and health reasons, and I’ve become a bit less strict in that I now eat fish and don’t mind things made with chicken stock, but still, I have not willingly eaten the flesh of land-dwelling animals in the greater part of 2 decades. That is, until last night.

The Minnesota State Fair is a big deal here. Absolute, serious, big deal. And it’s this week. We checked with Zoe’s doctor before scheduling her surgery to be sure that we could take her to the fair the weekend following the surgery. That’s how big a deal it is. One of the best parts of the fair is the crazy food – deep fried macaroni and cheese on a stick, deep fried twinkies on a stick, flash frozen ice creams, all the milk you can drink, really good cookies . . . It’s not the place to go if you’re looking to avoid food temptations. Each year, the vendors try to outdo each other with the craziest, yet still (nominally) edible, food items. Often of the deep-fried, on-a-stick theme.

Enter pig lickers, the chocolate-covered bacon phenomenon at this year’s fair, neither deep-fried, nor on-a-stick, yet still very much in the tradition of fair food.

As a chocolate lover, I was intrigued. For weeks leading up to the fair, I kept trying to convince Chris to try them. He was not so intrigued. It finally occurred to my that I was projecting my interest on to him, and if I really wanted to know how they tasted, I’d have to try them myself.

That’s right. I would end 18 years of no meat for a chocolate covered hunk of pig. I think that if they’d gotten bad reviews, I would have opted out, but they used really good chocolate, and really good bacon, and most people really gave it good reviews. Besides, if you’re going to go off the veggie wagon, even if just for a few minutes, shouldn’t you do it for something as crazy as chocolate-covered bacon?

Chris and I went last night with his family, and I admit, I wondered if I’d really go through with it. But then, there we were, in front of the Pig Lickers booth, and there was no turning back. I ordered the pig lickers and was handed the paper cup with half a dozen slices of bacon with one half dipped in chocolate. 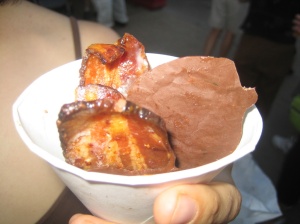 chocolate covered big in a cup

yes, that's me, with chocolate-covered bacon in my mouth and a smile on my face.

They were.. well.. they tasted like really good, thick chocolate, with a nice salty crunch (I love chocolate and salty combinations), with a distinctly bacony flavor. It wasn’t actually bad, though it probably sounds bad. In fact, I think it was pretty good. I liked the combination. I ate all the chocolate covered pieces except for a couple of bites that Chris and his mom tried (that’s right, Chris refused to try them, until I told him I was going to eat them, then shamed by his wife, he decided he’d be willing to try a bite). I couldn’t eat the non-chocolate covered parts, didn’t even try. A couple of random people outside the shop asked me if they were good or not, I enjoyed answering that I was a vegetarian of 18 years and was eating them.

I was, however, not at all tempted to go back to eating meat, not even another order of the pig lickers. I think that will hold me for the next 18 years. Or at least until next year’s fair. 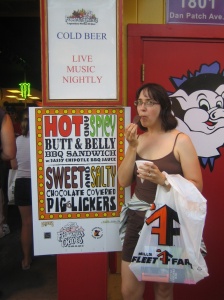